Which Cloud Provider You Should I Use 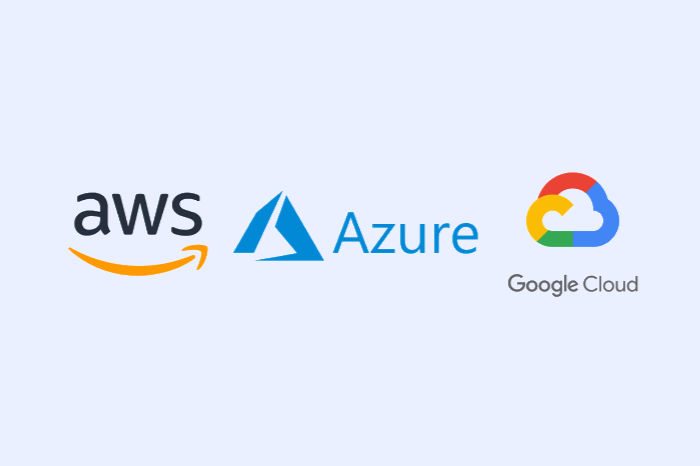 Cloud computing has revolutionized how businesses develop IT infrastructure. Through SaaS, PaaS and IaaS business models, it’s cheaper than ever to offer your software at scale to your customers. The question, now, is which cloud provider should you use?

Since the launch of Amazon Web Services (AWS) in 2006, tech giants have been locked in an arms race to capture the cloud computing market. Today, the top cloud providers with comparable services and scale are AWS, Google Cloud Platform (GCP), and Microsoft Azure.

Amazon is the undisputed leader of cloud service providers with its massive Amazon Web Services (AWS) platform. With over 40,000 employees supporting the business and developing new features around the clock, AWS offers more products, flexibility and support than any other provider.

AWS also boasts the most impressive clientele. Notable customers include Netflix, LinkedIn, Twitch, and Facebook, each of which spend over $10 million per month on AWS services.

Microsoft is an enterprise technology company, and it’s really good at selling software to other businesses. Azure is its line of cloud compute products aimed to compete against AWS and Google Cloud.

In terms of users, Azure boasts many mature enterprise customers such as Verizon, LG, Adobe and Intel.

GCP has a few unique advantages. First, it plays nicely with other Google products. Google is an Internet behemoth with over 200 distinct products, and many of these products have APIs and SDKs for developers. With GCP, working with Google’s other products becomes easier.

Finally, GCP leverages the billions of dollars of Internet infrastructure investment Google has made in the last 2 decades. Google has datacenters all over the world, owns a private fiber optic network, and also laid several transatlantic cables under the ocean to increase cloud reliability. With so much investment in Cloud infrastructure, the future of GCP looks promising.

Like AWS and Azure, Google Cloud also boasts some big-name customers like Apple, Spotify, Snap, and the New York Times.

Aside from Amazon, Microsoft and Google, many other large tech companies have also developed their own cloud platform.

IBM Cloud, Oracle Cloud, and Alibaba Cloud are some leading alternatives to the big 3, and with the cloud computing space advancing so rapidly it’s entirely possible that one of these platforms will rise to the top.

When it’s time to decide on a cloud provider, don’t be afraid to evaluate multiple options. Every single cloud computing platform offers a more-than-generous free trial for new users, so take advantage of the opportunity.

When evaluating different providers, test the waters first. Try spinning up a virtual machine or deploying a small sample app and get a feel for the UI, command line tools, and supported features.

Also read the documentation. Try to forecast what features your project will need, and see which provider offers those features. For example, if you’re planning to build a live streaming platform for book clubs, it’s worthwhile to research which platform has the best live streaming solution.

Finally, there’s pricing. Given that AWS, GCP and Azure have a lot of overlap in products and features, sometimes it just comes down to pricing. 3 cents versus 5 cents per hour for a virtual machine may not seem like a big deal, but when your app scales to hundreds of machines the difference can be thousands of dollars a month.