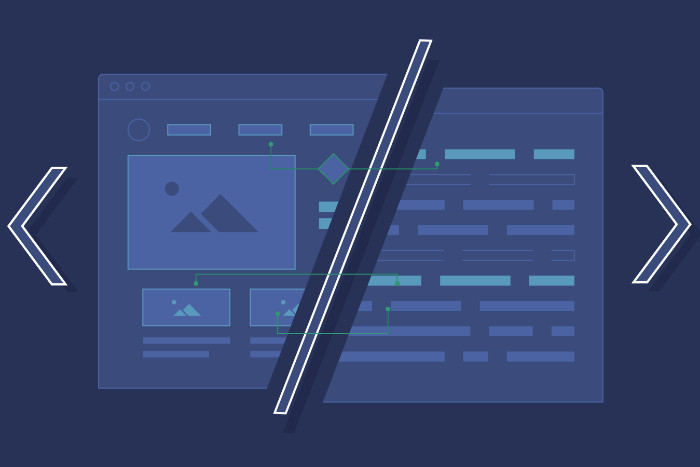 Frontend frameworks are used by developers to create client-side applications. They are instrumental to web development, power some of the websites on the planet (e.g. Facebook, Netflix, Youtube), and help drive trillions of dollars in revenue.

In 2022, there are dozens of popular frameworks to choose from in many different programming languages. Today we’ll go over the top 5 frontend frameworks and their pros and cons.

Originally developed by Facebook, React is arguably the hottest frontend framework in recent years. It’s an open-source framework that allows developers to make code changes easily, it has a unique feature called the Virtual Document Object Model (or Virtual DOM), a virtual representation of the UI that is kept in memory.

Angular is another very popular web framework. Originally named AngularJs, it was originally created by the folks over at Google (yes, it seems like giant tech companies have a thing for competing frontend frameworks) and later open sourced. In 2016, a brand-new rewritten version called Angular 2+ was released.

VueJs is a framework for building both dynamic and small web applications with ease. It’s a simple, straight-forward framework that developers can learn to use quickly, but despite being versatile, it’s not yet popular among larger companies.

EmberJs resembles Angular with its component-based functionality and two-way data binding. It was developed in 2011 thanks to the demands of modern technologies. Despite being one of the toughest Frameworks to learn, it is still used by some of the largest companies like Linkedin and Apple because it allows developers to create complex mobile and web applications easily.

Since its initial release in 2006, jQuery is the oldest framework on this list. However, to say it’s still popular would be a huge understatement. jQuery is a very simple Javascript framework that is easy to learn, fun to prototype with, and used by millions of students, amatuer and professional web developers. To this day, over 75% of the top 1 million websites in the world make use of jQuery.

Hopefully these 5 frontend frameworks can provide a starting point for you and your project. As always, the decision of choosing a framework should not only depend on its pros and cons but also your specific project. Choosing the right framework to fit your project needs is the key, and spending some time deciding could save you months of pain and regret in the future.