Mobile vs Web App - Which one Should You Build? 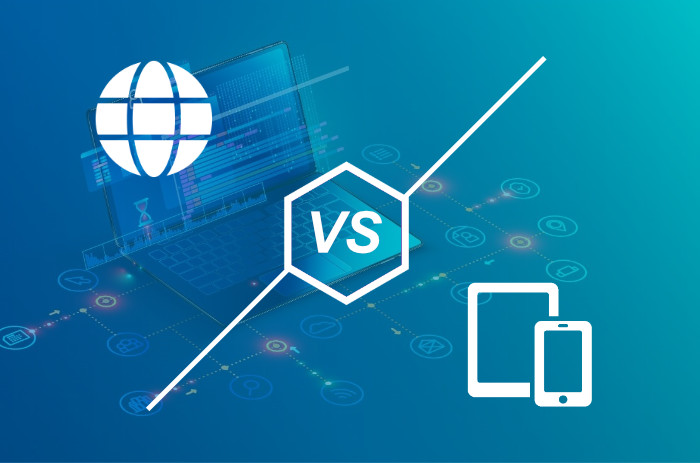 Previously we discussed the pros and cons of building Android versus iOS apps first. As a follow-up, today we’ll go over the differences between Web and Mobile apps, and which one you should build (if any).

Since the late 90s and the dot-com bubble, web application development has taken off as desktop and laptop computers became more and more ubiquitous to consumers. People had them in their homes and offices, and these devices were becoming faster than ever thanks to Moore’s Law and advancements in software development.

As more and more users adopted the Internet for their everyday needs, software companies capitalized on this growth by developing web development infrastructure and technologies to make the web browsing experience seamless.

Thanks to these developments and a ton of venture funding pouring into companies in the 2000s and 2010s, web apps became a standard product for software companies, and thanks to the cheaper cost of development versus traditional desktop apps, many smaller startups began building them.

Mobile applications, on the other hand, didn’t become mainstream until Apple released the first iPhone in 2007, but it quickly gained popularity among both solo developers and companies.

Despite the longer history of web applications, both web and mobile apps are both hugely popular with developers today. There are distinct pros and cons to each platform, and we’ll highlight some of them here.

Web apps are websites that perform a specific set of functions. They are more popular than ever in today’s Internet-powered society. From search engines to streaming videos to filing taxes, the potential of what a web app can do is truly limitless, and with so many tools, APIs and SDKs available, building web apps has never been easier.

Mobile apps offer a seamless experience to users. They are able to fully harness the power of today’s smartphone and tablet devices, and with the largest tech giants Apple and Google providing top-tier development tools and support for their respective platforms iOS and Android, there is no shortage of resources and support.

Although this post’s main aim is to cover the pros and cons of mobile and web apps, there are far more platforms to choose from when it comes to your project. Desktop applications are still widely used today for complex and high-performance software, and they will likely continue to exist for a while.

There are also other platforms that are more application or industry-specific. For example, smart IoT devices like the Amazon Echo have grown massively in popularity in recent years, and there are SDKs now for developers to build apps on these platforms.

No matter which platform you choose, the most important thing is to make sure that it meets the requirements of your project. Are your target users on this platform? Can this platform handle your application’s computing requirements? How hard is it going to be to reach potential users? These are the types of questions you need to think about before making a decision.